Clockworks Season 2 will be released on July 31st

thank you all for giving us so much feedback. It is great to see so many people waiting for our newest update. We are happy to announce the release date of Season 2 on the July 31st!

It's time we let you all know what we're working on! We've decided to focus on fewer new features and systems, but more so improvements to existing systems. This includes, but is not limited to:

The Angel you choose will now be able to learn both active and passive skills! Those skills will help you on your adventures in Madrigal.

The record book will have a come back on S2, helping you to measure your strength with other top players.

Guild Clash is an exciting PvP mode taking place twice a week. Up to 8 guilds can clash against each other in an all new world! The goal is to kill the crystals of the opposing guilds, whilst also defending your own. All participating guilds get access to their own private guild house for 7 days. Fight for your guild and receive Guild Clash Medals, you can use these items to buy exclusive consumables,  guild furniture, fashion and mounts!

Whilst this area probably won't be patched in until mid-Season 2, this new area will provide players with an alternative area to farm in!

Featuring an all new tier above Legend, Royal! The Royal tier will be obtainable at 350,000 Legend Score.

We've gathered up all feedback from the past six months and have made several changes to achievements, this includes modifying existing requirements and rewards and even adding new achievements. Achievements are now more exciting and rewarding than ever before!

We intend to bring some classes more in line with others to make them more attractive to play in the first place or reduce their overall powerlevel that overshadows all other options.

Updates to the way Blood/Titanbane are created to bring the overall cost down and make it more achievable for the average player in a timely manner.

Adjusted and changed mechanics for bosses and dungeons such as Hephaestus to make melee classes an actual part of the game, not just a sub-optimal choice in almost all cases.

We removed and added several items to bring Titan Auctions more in line with what they are supposed to achieve, upgrade your characters existing gear, instead of replacing entire parts.

As mentioned in the season-end-text we will reduce the amount of items dropped from bosses specifically a bit as to slow down the overall progression of a season and guarantee that killing a boss actually feels rewarding without flooding the market.

Several lower level items have received adjustments to their roll radii to make them less "hit or miss", giving all weapons a reason to be used, no matter how bad their rolls might be.

There will be more changes, such as QoL, updated items, general rewards in certain aspects of the game to ensure a smo

Donator of the Month Rewards July

Hi, please read this post first, if you haven't:

Season server has been successfully merged into CW server.

It has been about two months since the season has started. Many of you have already progressed far and have accumulated wealth and gear to beat pretty much everything the game has to offer. As we have mentioned in our seasons FAQ, we will let you decide when to end the current season, but more about that at the end of this text.

For now, let's talk about what we have learned and what we want to change for the future.

The first and most important thing we have learned: Do not launch a huge project when there are other obligations looming. Our main developer Vladi has probably lived through the hardest period of his life, trying to balance work, university, exams and server obligations while also caring for one's mental and physical well being. Though me and Chapstick are almost always available for support on game issues, neither of us has the ability to fix game breaking bugs on our own. In the future, we will look for ways to create an environment where less errors happen and where a fix for any given problem can be deployed as quickly as possible.

In game related, many of you have criticized that weapon and set drop rates were too high. Initially we increased them since we knew seasons would be a time-limited server that many might quit early or not start entirely if they felt like there was no time to progress anymore. As it turns out, we achieved the complete opposite of people reaching endgame way too quickly (given their time investment) and ending their run just as quickly due to having achieved everything. In the future we hope to fine-tune the numbers to keep players interested in doing dungeons, while also keeping the market at a stable point.

Other things that in our eyes were a bad addition were upgraded weapons from titans. These remove a major obstacle of clearing dungeons and devalue actual item drops heavily, since the titan weapons are so easily accessible. The idea was that those weapons would be used for creating Blood-/Titanbane weapons, but also affected the entire market heavily as a consequence. Removing or changing those weapons is something we would want to adjust for the future, while also re-evaluating the creation process of Blood-/Titanbane weapons.

Thirdly, the way general character progression works out is in our opinion very stale. Generally it is as follows: Create a Jester, level it to 80 Master, run Savage Wilds, get jewelry and ultimate weapons, level the character you want with those weapons and ignore every dungeon in between. Depending on player consensus, we might change something about that, but we will see what you guys think and hope for ideas and feedback.

Continuing, we strive creating a balance where characters have different roles to play while not being overshadowed in every aspect by others or being reduced to uselessness due to outside circumstances. One such example would be the ranged vs. melee class debate, where it is pretty apparent that melee classes have a huge disadvantage in both dungeon related tasks (monsters hit for a lot of damage) and general farming related tasks (money, materials etc.). Both issues are substantial and warrant a complete rework of certain aspects of the game to make it more accessible to all classes while keeping the general idea of different classes and their specializations alive.

Lastly, due to the influx of a huge amount of new players (we peaked at around 1500 characters online) and our real life obligations, we fell behind our communication efforts with players both in and out of the game. We pride ourselves with being a community driven server but didn’t manage to keep up with the demand thrown our way. Ideally, we would want to increase our presence whenever we can while also keeping up with other responsibilities.

Following that point, we were less transparent than usual, rarely talking about what we were working on or why something is delayed or why something is or is not implemented even though there is community demand for things. This was caused by a combination of the enormous amount of players and the time constraints that we faced, dedications to fixing game breaking bugs, as well as no dedicated channels where all that information is centered, so people can easily see what is the case. For the future, we would want to establish an easier way for people to see what we do and think, while also commenting on as many topics as possible.

The last and probably most damaging point, is the ability to sell your entire character. While we still want to support players who would want to switch to another class while making their own gear available to other people to enjoy, it comes with the downside that other players see that people stop playing. This can have a butterfly effect, giving other players a reason to also quit. Another aspect of the same problem, is people selling their gear for CWT, hoarding those funds for future seasons, effectively removing those CWT out of the system of people that continue playing the current season, increasing market pricing beyond what it would normally reach. All in all, we have not yet concluded how we want to combat these issues, but with user input and time, we will figure something out and present our ideas.

There are many more bigger and smaller things that we have not mentioned, these are the main points we as the admin team consider the most detrimental to server progression as well as gameplay that we want to change for all upcoming seasons.

And many more things for the future.
But for everyone who managed to get to the end, here are the dates that we have for you to bring Season 1 of Clockworks Flyff to an end:

As a reminder: this is the date at which Seasons and Clockworks will be merged. After that point, receiving Tier Sets won’t be possible, so redeem them before servers go down that date!

The Colosseum is a place where you can test your power, kill bosses, earn yourself valuable items and gain alot of experience. Colosseum, if taken seriously, can be a valuable place for grinding experience, upgrade items, power ups or general swag. To enter, talk to [Colosseum] Willy between the Card Master and [Arena Manager] Lay in Flarine.

The Colosseum can be entered in two ways, Normal and Guild Mode. If the party leader chooses Normal mode, everyone in his party can enter the Colosseum with him. Guild Mode only allowes party members to enter that are also part of your guild. Normal Bosses in both easy and hard mode have Tank AI. It is only available on Channel 4 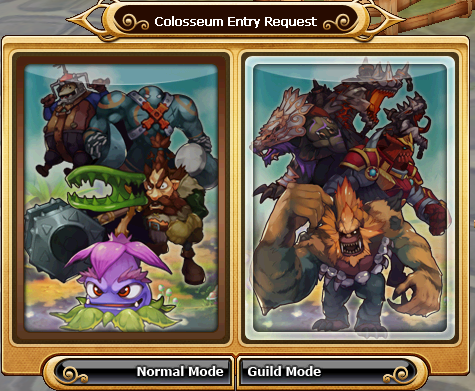 Normal Difficulty is completable by every class and consists of 10 stages, each one increasing in power and endurance. Each Stage awards every unique player in the group with 75 Colosseum Token, for a total of 750 if you manage to complete all stages. In this mode specifically, boss HP scales for every character present at the time a boss spawns. For example, if 6 characters enter Normal Difficulty, boss HP is increased by 500%.

Legendary Difficulty is designed to be killed with a group. It consists of 7 stages, out of which some bosses have special boss mechanics that make the fight harder and require tactics to finish. Each Stage awards every unique player in the group with 100 Colosseum Token for the first 6 stages and 150 for the last one, for a total of 750 if you manage to complete all stages. 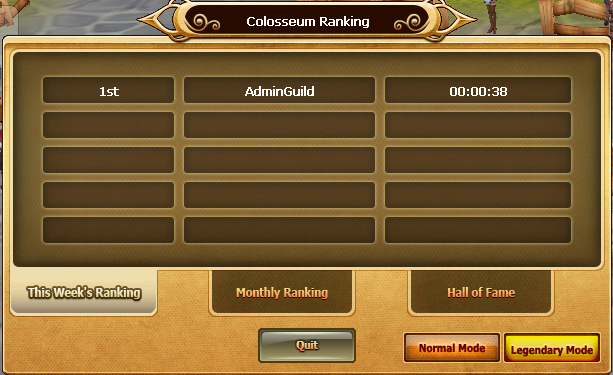 Each completed run time in Guild Mode is documented and saved in three different rankings, Weekly, Monthly and Hall of Fame. Weekly and Monthly are self explainatory, while Hall of Fame contains the 4 fastest runs of all time.

The shop contains many powerups unique to the Colosseum aswell as useful Upgrade materials for those still in progress of gearing their characters. 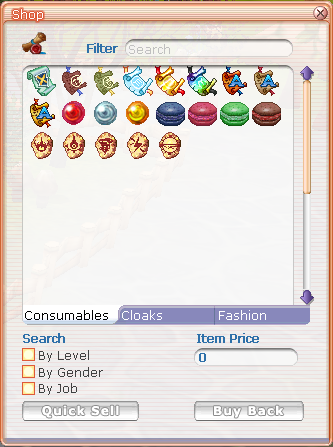 On top of that, you can purchase Colosseum specific Cloaks, Weapon Skins and CS Sets! 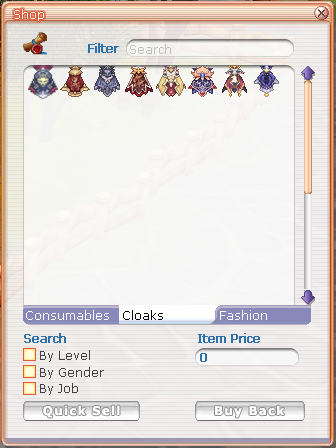 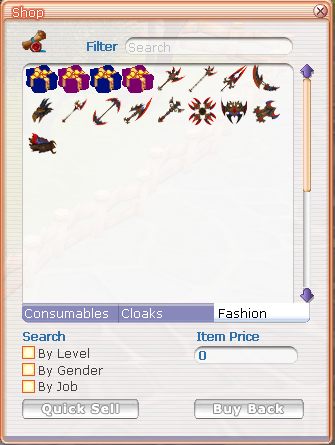